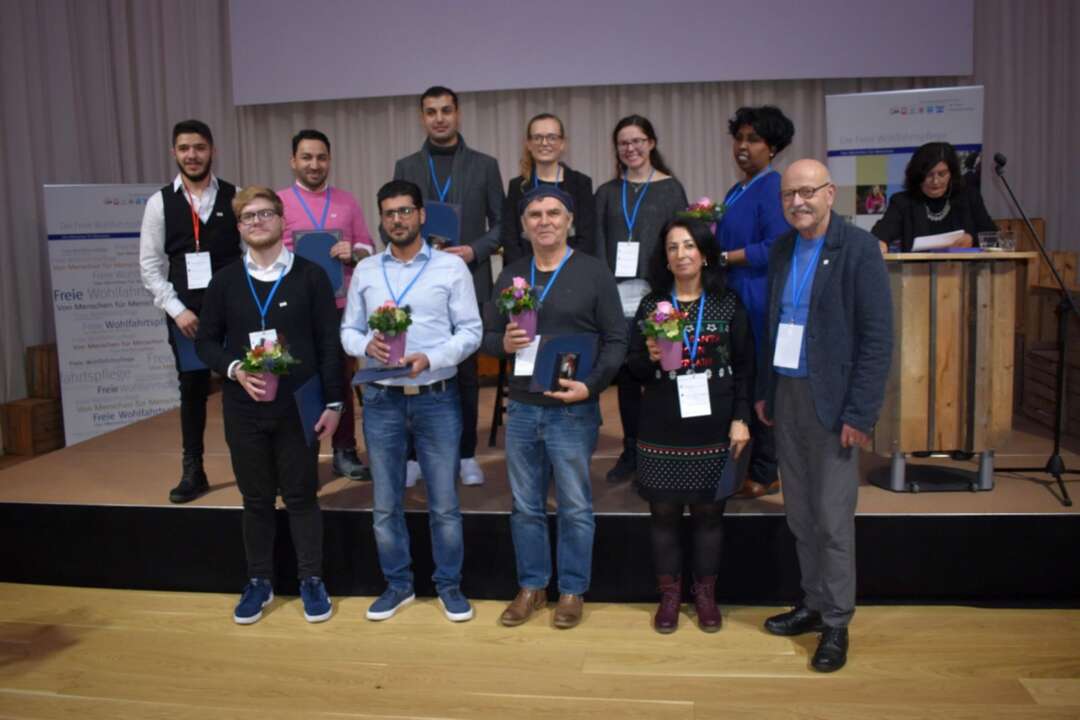 At the end of November of each year, the Federal Charity Working Group (BAGFW) organizes a two-day event. The objective of this event is to celebrate what was accomplished during the year in the field of volunteering through the six German organizations represented by this group as a joint work platform, and to honour the most important projects nationally representing the sixteen states. It is striking this year that Syrian presence on the platform of honour was overwhelming. Three of the five groups that were honoured were Syrian. 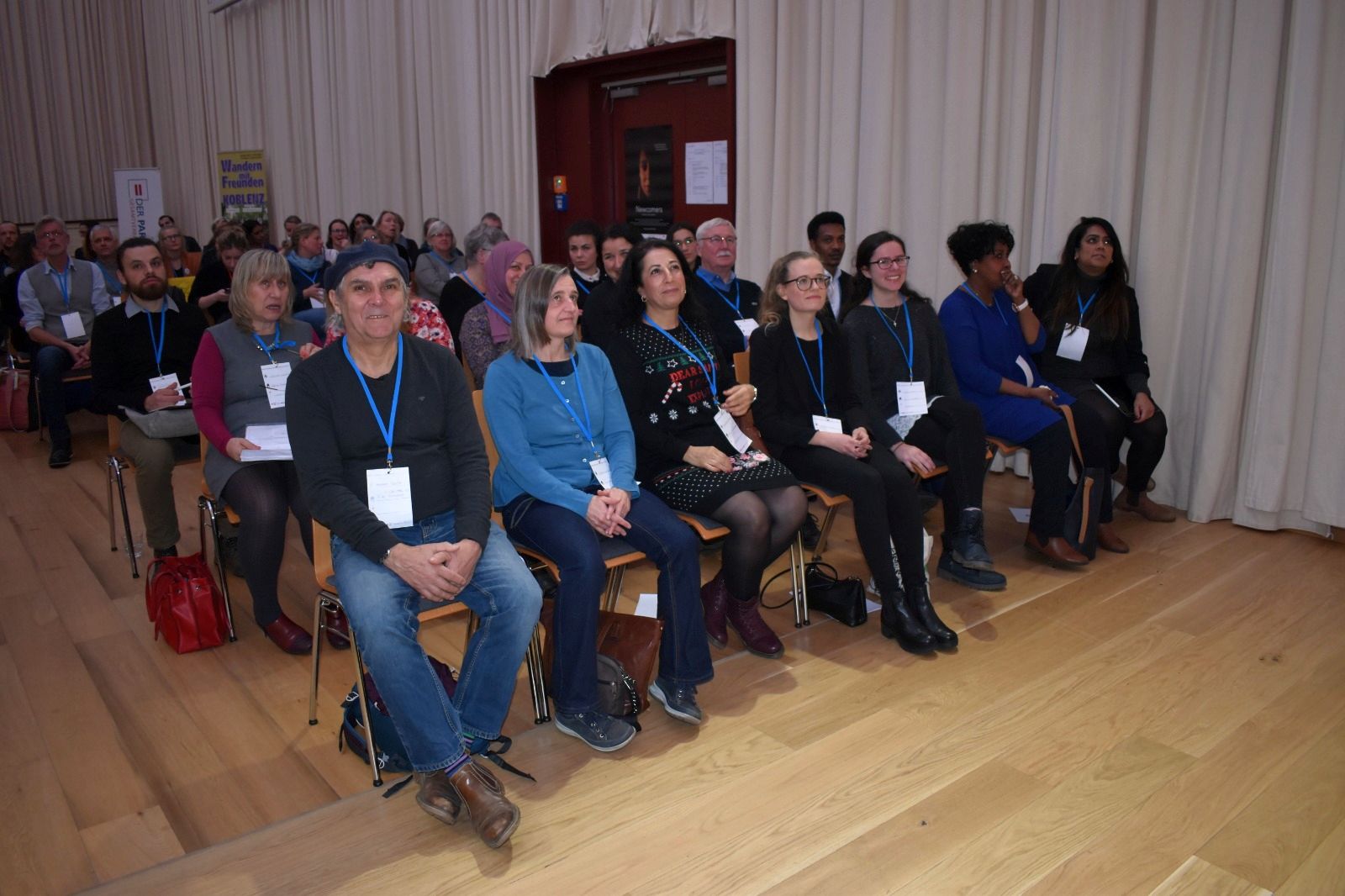 As has been pointed out in such events repeatedly, the Syrian refugee stands out in various ways, not only in regards to his ability to quickly adapt to the language and prove his worth within the field of his work or study, but also when it comes to the concept of volunteering itself. And the ability of those coming from a culture that hardly recognizes the value of such work, not to mention the challenges that the refugee faces in his early years in Germany imposed by his legal status, housing, and language. These challenges did not constitute an impediment to those who found themselves able to devote something of their time and effort free of charge to help others, when they themselves, as a refugee, are in fact in need help from time to time.

Taher Kidarsh and two of his Syrian colleagues were honoured during this event. Taher is studying medicine in Frankfurt, Germany. He had travelled from his city of Idlib in Syria to Germany in 2015 and volunteered with the German Red Cross (Deutsches Rotes Kreus).

In an interview with The Levant, Taher talks about their volunteering project in the state of Hessen. He says: "We are a team of five Syrians. We do a lot of activities with the Red Cross aimed at helping others learn the language, improving integration procedures within German society through translation, and working to communicate important ideas, within the framework of benefiting refugees and meeting their needs.

We later implemented a small project on the Red Cross site of Hessen County, entitled "Join the volunteers," and published short videos of all volunteers and their work within this organization. These videos went viral, which contributed to introducing us as a team to be honoured at this event." 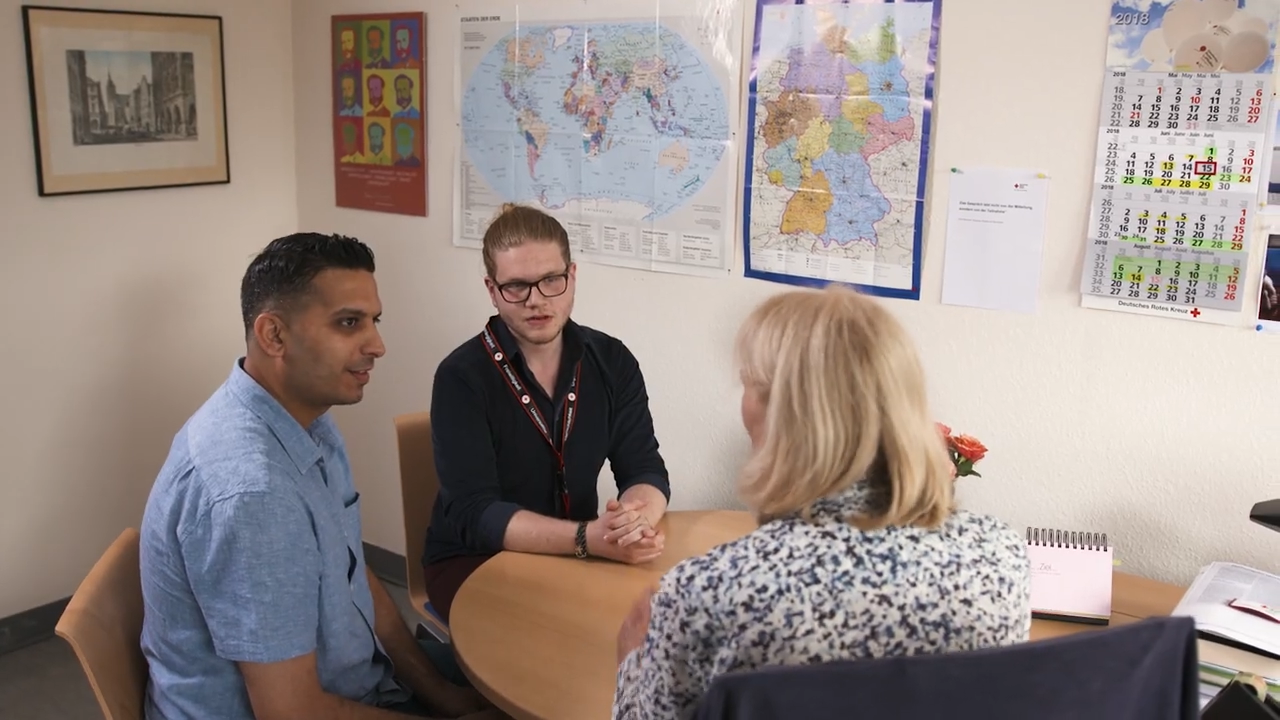 When we asked him about the difficulties that the volunteer might face in this field, he answered: "Of course we always face difficult situations that we cannot act on, such as translation, for example, in very depressing humanitarian situations, or sometimes we are unable to provide any assistance when the issue is related to documents that have not been presented to the party concerned or delayed for one reason or another. Some people think we can change that, but we are just volunteers, and this is what we sometimes try hard to explain to others."

Muhannad Al-Hashem, also a Syrian from Deir Ezzor, has sought refuge in Germany since 2015 and works as a volunteer with the German Diakonie organization in the state of Saarland.

"We work as a very large team of volunteers on a multi-department project. Our project was funded and supported for a period of four and a half years by the German Diakoni organization, which funds the work of the project manager only - a German employee - as a part-time job. Our work in it is entirely voluntary.

The project consists of five teams: The first team focuses on Arab women who came to Germany by under family reunion schemes and thus did not have the opportunity to learn the language or integrate into German society, assisted by Arab women who previously came or German women.

The second group focuses on the spoken German language and its teaching methods for refugees due to the big difference between the formal and spoken variations of the language, and the need of many to learn both of them.

The third team offers formal German lessons with focus on grammar and the basics. As for the fourth team, it is made up of a team that works with refugees to find practical training or vocational training opportunities for those who need help with choosing the right option for them from the various options available in Germany for studying, or to help with the certifications of the degrees obtained by graduates of Syrian universities or institutes.

The fifth team is responsible for helping with finding job opportunities for refugees. It is the department that I’d be very sorry to see close down, if we do not find a new funding scheme for our project because it has helped many so far."

Sabah Omar, a Syrian from Aleppo, has also been a refugee since 2015 and works with AWO in the state of North Rhine-Westphalia

Sabah spoke about the project she is participating in as a volunteer , who was also honoured for her work in 2019, she said: "The project is for women, all they need is to learn German to participate in social activities, to find a house or an interpreter during official meetings, or psychological support. Through my work, I know that Syrian women are in constant need of support, especially from those who can speak their language and can understand their needs and problems, and this is what I am trying to offer as a guide for Syrian women and volunteers for three years."

The culture of voluntary work, or as it is now called "social capital," is a culture well rooted in German society, through which it seeks to establish the principles of social solidarity and equality among all its segments.

According to the German Statistical Research Department, 31 million people work in the voluntary field, about 44% of German society, in the areas of caring for the elderly, firefighters, or in organizations such as the Red Cross.

Looking at the statistics over the past four years, we find that the number of workers in the voluntary field from 2015 to 2019 increased by 2.54 million people, a large part of those are refugees themselves who refused the idea of being aid recipients only but instead opted to enter the field voluntary work.

But there is a difference between a German citizen who lives in his home country, is settled in his work or study and place of residence, who makes a decision to enter the field of voluntary work as part of prevailing social culture, and a refugee who has been in Germany for no longer than five years, who is still learning the language, is trying hard to find an opportunity to work or study alongside the continuous paper work of renewing his temporary residency, who still decides to engage in several voluntary activities. We believe that the two cases are not equivalent.

Why does a refugee want to work as a volunteer?

The motives for volunteering are, of course they are individual and personal, but humanitarian and moral reasons always come first.

A survey carried out by the Federal Ministry of the Family, Older Persons, Women and Youth (BMFSFJ) in 2014 listed a number of recurring motives for volunteering in Germany. These include, but are not limited to, the enjoyment of the activity concerned itself, the opportunity to do something for the public good even on a small scale, as well as a chance to broaden horizons and learn new skills.

According to the survey, young people, in particular, often feel the desire to try something new with others and possibly to enhance their expertise. While the elderly prefer to pass on their knowledge to others and pursue a meaningful task after work.

As for refugees, or as I like to call them "new volunteers," in addition to the above, volunteering gives them an opportunity to reduce social exclusion, by affirming the self-image of the immigration community, And work to promote coexistence and social diversity by merging the different cultures with joint activities aimed at preserving the essence of the other culture, not seeking to dissolve it, and also trying to change the general perspective of the refugee as a recipient of assistance only, and facing the culture of hatred and fear of the other through initiative and interaction, and also provides them with an opportunity to obtain the appreciation They deserve as entrepreneurs, something they have maybe always dreamed of in their home countries.

Britain .. When the opponent wins by the ignorance of his opponent ! New evidence reveals the involvement of Turkey and Qatar in funding and supporting al-Qaeda in Syria