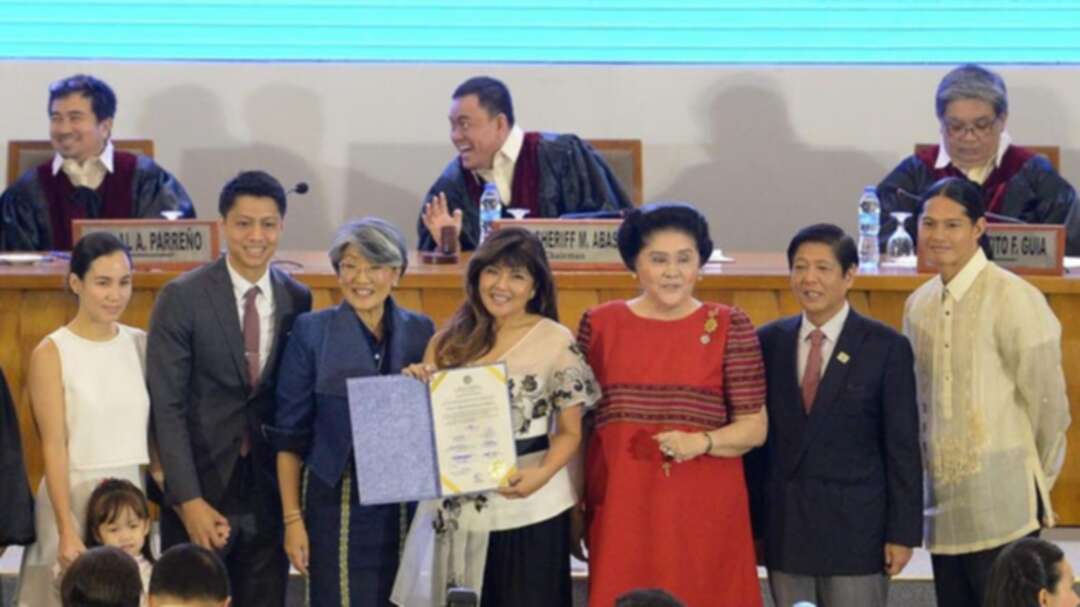 Philippine Senator-elect Imee Marcos (C), former first lady Imelda Marcos (3rd R, in red), and other family members during the proclamation ceremony by the Commission on elections in Manila on May 22, 2019. (AFP)

A Philippine court threw out a high-profile, 32-year-old forfeiture case on Monday involving the family of late dictator Ferdinand Marcos, citing insufficient evidence to order the return of $3.9 billion of allegedly ill-gotten wealth.

The country’s anti-graft court decided in favor of the Marcoses for the fourth time since August, with judges ruling that photocopied documents could not be used as evidence, so the case would not proceed.

It has been referred to widely as the “mother” of cases in a three-decade effort by a special presidential panel to recover an estimated $10 billion allegedly siphoned off by Marcos and a family that had lived lavishly during his 20 years in power, 14 of which were ruled under martial law.

The case lodged by the Presidential Commission on Good Government had sought the return of 200 billion pesos ($3.93 billion) it said was tied up in equities, numerous local and foreign banks and real estate at home and in the United States and United Kingdom.

It also included the value of 177 paintings and 42 crates of jewellery worth nearly $9 million.

In a 58-page verdict, the court “acknowledged the atrocities committed during martial law under the Marcos regime and the ‘plunder’ committed on the country’s resources.”

“However, absent sufficient evidence that may lead to the conclusion that the subject properties were indeed ill-gotten wealth, the court cannot simply order the return of the same to the national treasury.”

The same court dismissed similar cases against the family in August, September and October, all for lack of evidence.

Despite being overthrown in a 1986 revolt and driven into exile, the Marcos family remain a powerful force in the Philippines, with loyalists throughout the bureaucracy and political and business elite.

The late leader’s wife Imelda was a four-term congresswoman, daughter Imee is currently a senator, as was son and namesake Ferdinand Marcos Jr, who has been tipped as a possible candidate for the presidency in 2022. A relative is the current Philippine ambassador to the United States.

The family has a powerful ally too in President Rodrigo Duterte, who has spoken well of the former dictator, backed Imee’s senate run and expressed a desire for Marcos Jr to have been his vice president.