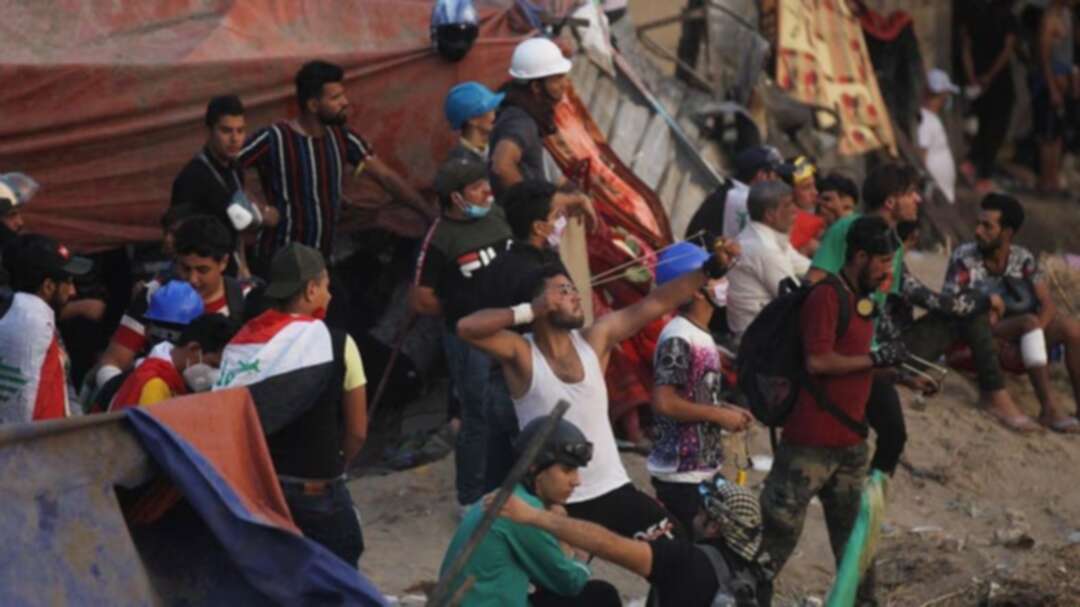 Iraqi demonstrators use sling shots as they gather under the Al-Jumhuriya Bridge in central Baghdad during continuing anti-government protests on November 3, 2019. (AFP)

Iraq’s Prime Minister Adil Abdul-Mahdi appealed on Sunday to protesters to help restore normal life across the country and said the unrest was costing the economy “billions of dollars.”

More than 250 people have been killed since the protests in Baghdad and the south of the country started in early October, driven by discontent over economic hardship and corruption.

In statement published on Sunday evening, Abdul-Mahdi said the protests which “shook the political system” have achieved their purpose and must stop effecting the country’s trade and economic activities.

Operations at Iraq’s main Gulf port, Umm Qasr, near the oil-rich city of Basra, which receives the bulk of Iraq's imports of grain, vegetable oils and sugar, have been at a complete standstill since Wednesday.

The protests have broken nearly two years of relative stability in Iraq.

Despite the country’s oil wealth, many people live in poverty with limited access to clean water, electricity, healthcare or education.

Protesters in Iraq’s capital and its south shut down streets, schools and government offices on Sunday, AFP’s correspondents said, escalating the month-long movement demanding change to the country’s political system.

Meanwhile, more than a thousand demonstrators clashed with Iraqi security forces in front of the Iranian consulate in Karbala, according to Al Arabiya’s correspondent.

Security forces later dispersed the protesters in front of the Iranian consulate and secured the building.

In Baghdad, university-age demonstrators parked cars in the middle of main thoroughfares, blocking traffic on the first day of the work week.

Police officers manning nearby checkpoints looked on but did not intervene.

Other students took part in sit-ins at their schools, and the country’s national teachers union extended the strike they began last week.

The engineering, doctors and lawyers syndicates have all backed the protests.

In Kut to the east, protesters sealed off main roads and bridges and most schools and government agencies were shut.

“We decided to cut the roads as a message to the government that we will keep protesting until the corrupt people and thieves are kicked out and the regime falls,” said Tahseen Nasser, a 25-year-old protester.

“We’re not allowing government workers to reach their offices, just those in humanitarian fields,” including hospitals and police officers, he said.

Further south in Hillah, Nasiriyah, Diwaniyah and the holy city of Karbala most government offices were not open.

And in Basra, the oil-rich port city, public schools were shut down for the first time since the movement erupted last month.

Demonstrations broke out in Baghdad on October 1 in outrage at unemployment, poor public services and corruption, quickly spreading to the Shiite-majority south.

The activists were confronted by security forces, and 157 people - most of them demonstrators in Baghdad - were killed in six days of rallies.

But the protests resumed on October 24 and quickly swelled with the support of students, who skipped class to protest despite orders from Iraq’s higher education minister to stay away from the rallies.